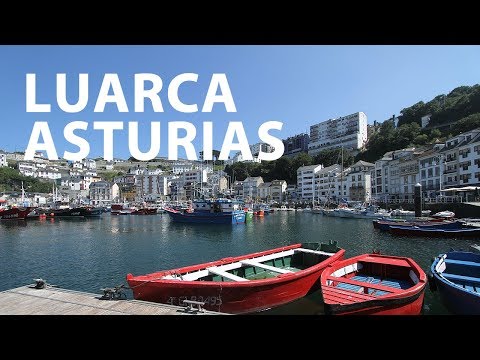 Luarca has also gained its popularity by its own merits: its natural beauty, its particular shape imitating an S and its tourism that during summer time, quintuplicate its usual native population. The main economic activity of Luarca is fishing but it is also the capital of the council of Valdés, one of the most cultural towns in the western area of Asturias.

The fame of Luarca has spread widely along the whole country being today one of the most known villages of the region of Asturias. This fame probably is based on the fact that the Nobel Prize of Medicine, Severo Ochoa was born here.

The river Negro ends its course in this village where it finally joins the sea. This natural location favours a proper infrastructure for the commercial, sports and tourist development.

This village, baptized as the White Village of the Green Coast, is clearly divided into two areas. The central area houses the oldest neighbourhoods, all of them of medieval origin, as the one of La Pescadería, La Carril or El Camboral which surround the port and the church. As we go to both margins of the river, we can find the most modern of Luarca. Born in the nineteenth century, this village today covers the majority of the commerce of the whole region. From side to side of this village, we can cross up to seven bridges over the river. These bridges daily link both areas of the urban centre.

Despite of its modernity, Luarca still keeps its traditional nature. It is one of the best places to taste the delicious seafood of the Cantabrian Sea as well as its famous cider. In the port area we can also find different restaurants in which we can taste not only fish and seafood, but also all the local specialities while we enjoy the soft breeze coming from the sea.

The visitor also can see the coming back of fishing boats at the port. The capture of the day will be sold in the fish market around three in the afternoon. This commercial activity proves the passion of these people for the sea and also their sociable character. In the old times in this same place, mariners and navigators decided whether they leave or not the port under stormy weather.

The whole history of Luarca has always been linked to sea. The old activity of fishing comes from the last stage of the paleolithic. This stage was fairly important because of its relevant findings that gave fame to this region, for this reason this stage began to be known as the Asturianense.

The sea is the main support of this village but it was also the stage of numerous battles. The Norman invasions during the ninth century left fortifications as the one called Atalaya which is today an exceptional viewpoint.

The sea also provokes an ecological interest on the people from Luarca. The classroom of Sea (el Aula del Mar) of this locality has been the centre of different studies. Also here, we can visit the museum and see in it one of the rare specimen of huge squid that was found in the Asturian coast in 1999. Finding a specimen of these characteristics is always something rare and uncommon.

At birth’s view we can see how the river Negro flows into three different beaches surrounded by a rocky coast, forests of deep green colour and valleys which invite the visitor’s admiration. The landscape turns more abrupt as we go more to the interior. A bit further of the coast we can also see mountains of more than 1000 metres of height. Also in the same council of Luarca, we can visit other towns as the parish of Trevias or old whaling ports as the one of Cadavedo.

But if we are interested in the history and culture of Luarca we may highlight the neolithic culture of its surroundings, characterised by the presence of forts. We can also find here roman and medieval archaeology. As regards its artistic patrimony, we will highlight the palaces of the marquesses of Gamoneda and Ferrera, the tower and big house of Villademoros, apart from the latin American villages: Argentina, Excelsior, Tarsila, Hilda, Rosita…

Of its history Luarca has learnt to be vital and noisy. We can not forget its festivities of San Timoteo (22nd August), its local Easter or even the pagan feasts among we find the Carnival in which one can enjoy the best peasant gastronomy: cold meat, frixuelos (a delicious local dessert) and rice pudding.

The village of Llanes The sea village of Lastres Cimadevilla, the essence district The top ranking towns of Asturias