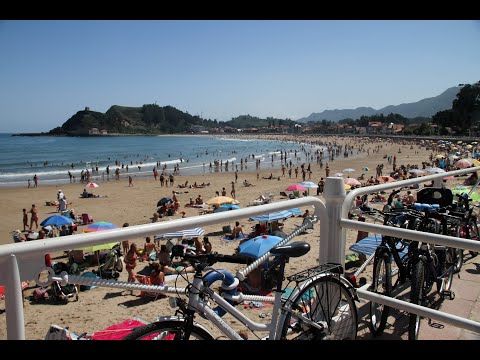 There are only few beaches in the Cantabrian coast that can draw a panorama such like this and which is at the same time surrounded by a so contrastive landscape. Taking a bird’s eye view or seeing the beach of Ribadesella from its popular walk of Guía or even the mount Corberu, we can also discover the Sierra of Escapa, the mount Mofrechu or the Sierra of Sueve. All these places together provide this area of an extraordinary background. There are also high peaks that descend softly up to the sea level giving this area a spectacular view.

We can observe the river Sella which ends on its same beach and that also forms one of the most beautiful estuaries in Asturias. This river resembles a snake because of its curves and finally ends in the sea. The mouth of this river is suitable for practising nautical sports, fishing or enjoying the landscape. The beautiful town of Ribadesella its placed on one side of the river Sella, on the other one its opened the beach.

Now, it is time to visit the beach of Santa Marina. It is one kilometre and a half long beach, a nice place where history, tourism, society and ecology put together. The idiosyncrasy of this quick sand is taken from its past. Before the 19th century it always remained the same, like a lonely shell shaped island next to an extense wet territory. Today it works as an ideal habitat for numerous migratory bird species. Also by that time this beach was surrounded by the mount Somos and Corberu then still virgins.

When in 1898 began to work the new iron bridge over this river, the quick sand then remained those inhabited places which so much inspired the painters of that time. But the improvement on communications brought the first urban colonization of this area. Villages, palaces and modern houses today still keep all its charm and make of the beach of Santa Marina a unique landscape which combines the modern art together with its delightful architecture.

The beach of Santa Marina fits together sand, sea, sun, surf, swimming, footing… but it is also good for contemplation and admiration. Its maritime walk is often crowded because this sea breeze always wakes up all our senses.

This area is characterised by its peculiar urbanism. Opposite to the beach we can find the constructions of the first tourists: all members of the aristocracy and high regional bourgeoisie which used to go to the beach attracted by the new fashion of swimming. Thanks to the marquises of Arguelles’ initiative in 1940 the spa opened its doors, offering different sea iodine and seaweed baths. A little bit later began the lined construction of chalés opposite to the beach, such examples as the one of the marchioness of Arguelles called Villa Rosario, the chalé of Antero Prieto (later called Uría Aza) and the one called Villa San Pedro. All of them are clear examples of this period.

During the 20’s and 30’s the quick sand of Santa Marina was becoming a garden city that before the Civil War was already formed by thirty rich chalés. In this type of constructions we can find towers, glazed viewpoints and balconies. Up to the 60’s this garden city would not suffer the effects of deep development. From them onwards, the three month holidays and weekends were mainly for the middle class. At the end of the 80’s and beginnings of 90’s the semi-detached houses were growing popular overall as its version of a second house, many examples can be found in front of this beach.

This beach is also a meeting point on the way to Santiago, from here the road follows to San Pedro, Abeu and Leces, where a pilgrim shelter is located.

This area is also so much admired by paleontologists, since in the beach itself, at the end of the walk of Punta of Pozu, down the cliff we can see some traces of dinosaurs.

For the spare time, Santa Marina is a very nice beach for all kind of public, crowded during summertime but very suitable for nautical sports including the annex estuary.

The pedestrian way to the beach is accessible by ladders and ramps. We also have bay watch security, toilets and signs of danger (also through megaphones).

We can also sit down by one of its open air cafes, have a nice snack or a beer and at the same time enjoy the summer nice weather.

Visiting Santa Marina is always a good choice at any season of the year. We have already mentioned its maritime walk, its unique architecture or its jurasic deposits. In its surroundings we can also visit The Natural Park of the Malecón, a wet territory full of paths that lead us along all its ecological richness, where we can find an important colony of wild ducks.

Pets in the beach

Pets are allowed between 22.00 hours to 08.00 hours during the summer season. The rest of the year the access is free.

2 responses to “The beach of Santa Marina”