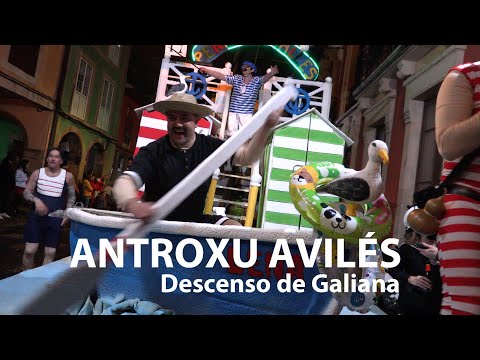 Since then, in order to know when is the “Antroxu” celebrated every year, we only have to take the calendar and look for the Sunday of Lent which closes Easter, and finally count back seven weeks. This is the fixed time for the celebration of the Antroxu. The immediate preceding of carnival is still here on Thursday of Comadres. In this day mainly women go out and spend a nice time at the streets during a long night. In other places such as Gijón, Avilés or Pola of Siero, these meetings are also popular and are becoming more and more popular in all the asturian region.

During the previous days to the end of carnival and the forty days Lent lasts, the asturian people feel the impulse to grow in other entities. Traditionally, this metamorphosis was usually accompanied by thick vegetable soup over all, during winter. Today the typical gastronomy of the “Antroxu” is influenced by that old tradition. On current carnival we can taste pork, this type of meat was forbidden during the seven weeks of Lent that followed these profane celebrations.

Time before the participants of the Antroxu usually painted their faces on black colour, using for it burnt cork or soot. It was the cheaper way to get a masquerade. Years ago it was very common to disguise oneself as an animal, taking for it different leathers and skins of animals. At that time, it was also very popular to be dressed in poor clothes like the “probones” or “antroxos” whose ancient gender were the “guirrias” and “zamarrones” (all these characters belong to the Asturian mythology), who usually asked for money at the end of the year. It was also common to be dressed in the opposite sex clothes. Men were dressed up in women’s clothes and women in the other way round. This custom was heavily criticised by the Church for being considered as unmoral.

The musical instruments played on this carnival were daily items such as tins, fry pans, horns and whistles. Al these strident sounds are still today haughty and listened to thanks to the brass bands.

The Antroxu in Asturias was forbidden for a long time. It was recovered thanks to the coming of the democratic councils during the 80’s. Nowadays the carnival still keeps its old essence of the “antroxu” but the shapes and clothes have been changing. The carnival underlines a way of changing daily routines by commiting “irrational” acts overall during the long nights of winter. The irony, the satire and the songs are especially brilliant when criticising famous people and politicians.

Some places of Asturias have a long carnival tradition. In the three most crowded cities of this Principado of Asturias, the spirit of the Antroxu is especially much more alive than ever. Avilés, Gijón and Oviedo live this festivity with great pleasure. During the 19th century, in the city of Avilés live together two kinds of celebrations: the popular “Antroxu” and the carnival which only a few could enjoy: the wealthy classes. They were able to celebrate this festivity with floats, expensive decorated cars, dances and battles of confetti. This carnival resembles much that of Nice and Venice. On Monday of carnival were the poor classes who took the small towns to enjoy the carnival on their way: strange clothes, battles of eggs and bands of musicians at the streets.

At present, Avilés is the perfect scene for the International Descend along the Galiana Street. It consists of a procession of floats and items of any type, decorated with naval motives. The crew descends the Galiana Street on Saturday of carnival. This street is full of water and foam. From the carriages people pour water over the spectators and these last take their particular revenge against the others.

In Gijón, carnival officially starts the night of the “Thursday of Comadres”. This is the moment in which the name of the sardine is revealed. From this moment on and during six long days and nights, carnival counts with an extensive programme of activities: competitions of brass bands, floats etc, cultural and recreational activities for all ages. In the Mayor Square the Sardine waits for its death, afterwards there is a respectful vigil and after would come the funeral cortége. Some time later, the testament of the poor Sardine is read and it keeps buried until the following year.

The Square of the Cathedral, the street of Trascorrales and all the close streets conform the central point for the “Ovetense (gentile) Antroxu”. The celebrations in the old streets of Oviedo always take place the weekend after this festivity is first celebrated in Avilés and Gijón. At this festivity people can taste a special menu for the occasion: a carnival pot. Numerous restaurants serve it. It is a good stock accompanied by cabbages, beans, potatoes and pork. After this heavy dish we can also taste two delicious desserts, the casadielles (local cakes), the frixuelos (other sweet cakes) or rice pudding. This is a suitable menu for saving energy until the end of this celebration.

As well as the so called “Antroxu”, the gastronomy which goes with it also extends for all the corners of this Principado. In the western area the typical dessert is the “rapón”, a cake made of corn and mixed with water, salt, onion and pieces of sausages and bacon. It is also covered with cabbage leaves and baked in the oven. In the Eastern part of this region we can find the “boronas preñadas”, a type of rolls made of corn, filled with sausages and different kind of meats. The most famous dessert in this area are the “buñuelos” filled with cream or the “rustidos”, tasteful pieces of bread dipped in milk and eggs, after fried and finally sprayed with sugar.

One response to “The famous Carnival in Asturias “The Antroxu””

The festivity of Saint Matthew A walk by Avilés Cimadevilla, the essence district