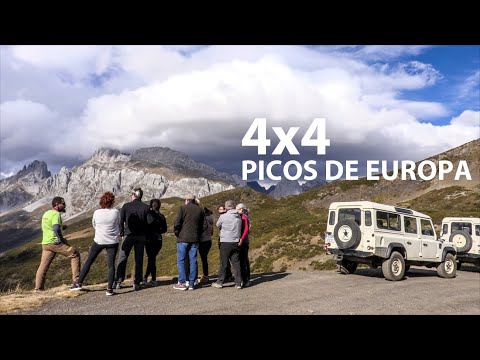 The Peaks of Europe, a National Park, are for their height and beauty one of the most famous places on the continent. In this landscape one can find gorges, rivers, valleys and deep native woods.

Also here, the Peaks house a great variety of wild flora and fauna in their height of 1600 m. Below this level, the landscape is full of beech trees and flocks of fantasy. The people living here are accustomed to living in small rural groups, living of the cattle they raise in this perfect landscape.

This great formation of lime expands over 40km (from the East to West) and also has a width of 20km (from the North to South). It constantly suffers from erosion caused by the rain and snow that also causes deep fissures in the mountains, resulting very attractive for the speleologists. Some of these caves go beyond a depth of 1400 metres.

The Peaks are clearly divided into three masses: The Western mass (The Cornión), the Central mass (The Urrieles) and the Eastern mass (Andara). These three masses are bordered by the gorges of the rivers Sella, Cares, Duje and Deva, where salmon fishing is quite popular. The Western mass reaches its highest peak in Peña Santa of Castilla (2596m), this is very suitable for walk lovers. The lakes Enol and Ercina are very close to the area of Buferrera, the environmental centre of the National Park of the Peaks of Europe. The closest place to start this natural route is from the locality of Covadonga, following the road to the lakes, 12 kilometres away. The best times to carry out this route are the end of summer, beginning of Autumn and Spring because the route is not crowded and the weather is really nice to walk places in.

The Central mass is the one with fewer inhabitants and in it lies the highest Peak out of the three masses and also the highest of the North of Spain: It is Torre Cerredo (2648m). The border of the Western mass coincides with the famous route that follows the gorge of Cares. Bulnes, the last town in the Asturian region is also located in this mass and it was also an important stop for mountain climbers on the way to Picu Urriellu or Naranjo de Bulnes (2.519m). This is the one of the greatest goals for many national climbers and also international climbers, due to the fact of the vertical walls. The town that gives the singular name to Naranjo was linked with the council of Cabrales. The road to get to Cabrales was very inaccessible but recently a funicular train was inaugurated, to hopefully break the isolation of the town. The access to the North point of the gorge of Cares and Bulnes, is through Poncebos a few kilometres from the locality of Arenas de Cabrales.

If one is interested in getting to the South of the Peaks of Europe, the road to follow comes from Potes, in Cantabria, or from Posada de Valedón in León. From Potes one can get to Fuente Dé and from there take the cablerailway going up by 1800m. This is the easiest way to reach heights for all those excursionists interested in looking at the Peaks from a safe place better than climbing the mountains by themselves. Posada de Valdeón is down the gorge of Cares, after passing the town of Caín.

From Sotres to Naranjo

Because of the many possible routes, our advice for this, is to do these routes from June to October, avoiding in this way the snow and the adverse weather conditions of winter.

It is, with no doubt, one of the most attractive routes of the Peaks of Europe. Here, on this route one can find two refuges, the one of Terenosa and the other one is Vega of Urriellu, on the base of Naranjo of Bulnes.

Before we arrive to the locality of Sotres we find the road towards Aliva. We follow it about 200 metres and there we can see several huts spread around the meadow from which the river Duje descends. From here, we go down to the river and cross a stone bridge 860 metres long, taking a road that ascends to the opposite slope until we reach the town of Collado Pandébano. In this place, the herds feed themselves during the nice weather. This is a quiet route surrounded by beech trees and next we cross the fields close to Collado.

From the locality of Collado Pandébano (at a distance of 1212 metres from the starting point of our route, Sotres) we follow the road towards the refuge of the Terenosa. Then, we cross Collado in the direction to S.O. Here, we find a road towards the town of Terenosa, where the refuge is situated 1315 metres from Terenosa. Now, we take the last road that leads us to the greatest slope of the famous Naranjo Mount. When we touch the Picu Urriellu, we can safely say that the hard task of our route is over, and can feel very proud of ourselves as we get closer to the last stage of the route.

If we want to return to Sotres, the only thing to do is just to follow the route on the other way round.

An excursion to Vega Redonda and to Mirador of Ordiales

The refuge of Vega Redonda is a classic hostel for mountain climbers and those people keen on nature. This is a nice and welcoming hostel. The Civil Guard of Cangas always provide the present telephone number of this refuge. It is possible to go and come back to Vega Redonda on the same day.

The excursion to the Mirador of Ordiales is ideal for children. The unevenness is about 500m , with no misfortune along the whole route, a place where it is impossible to get lost.

From Covadonga we go up by a road from which we can see the first lake: the Enol Lake. Then, the road turns to the left and descends on our right, the road opens and this road is easily transitable for all kind of vehicles reaching here a road to the car park of Mirador del Rey. From here, a road starts that will lead us to a refuge. After two hours of walking in the middle of a mountain we see a landscape all surrounded by vegetation.

Finally, we reach the old refuge. From here, the road towards the Mirador of Ordiales starts and then we cross a channel of considerable unevenness. When we reach this point of the route, there is no more ascents. At the end, we reach the refuge of Icona reaching the limit of a beautiful cliff, where the founder of this park, Pedro Pindal is buried.

Now, we are over the valley of Amieva and it is easy to realise that this walking route has been very worth while.

11 responses to “The Peaks of Europe, a National Park”

Bulnes, heart of the Peaks of Europe Covadonga: the Lakes Sotres, the highest town Cares Route