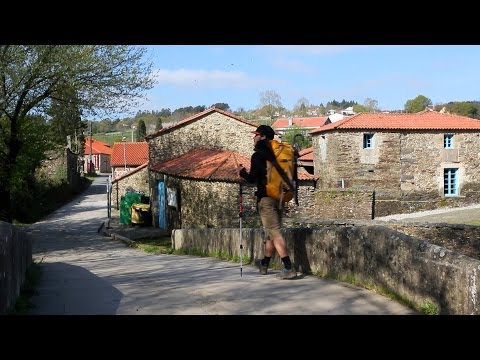 Although the route to Santiago through Asturias is not much transited with respect to other routes to Compostela, it is true that the Jacobean route through Asturias shows a lot of beauty and numerous points of cultural interest that it has nothing to envy of the other routes. The Principado of Asturias was the first point in the pilgrimage on the way to Santiago. Three centuries before the summit of this universal route in the 20th century, the Asturian monarch Alfonso II had begun his journey to the Apostle tomb. This famous king linked the city of Oviedo with Compostela through the ulterior Western grounds of Asturias. Finally, he came to Iria Flavia where Paio hermit had had visions of different angels pointing out the Libradón’s Mont. This announciation came to be heard by the bishop Teodomiro who was the first in finding the sacred grave. After this event, Alfonso II went on a route to Galicia and also ordered that a little church made of mud be built over the sacred grave. This same king told this to Carlomagno and this new was quickly spread all over Europe.

Some time after, this old route became less important in favour of one that crosses the Meseta. This last one had been much visited during the 11th nd 13th centuries, when San Salvador of Oviedo became a central point to be visited by numerous pilgrims who pay homage to this saint.

But apart from this route followed by the king, history has provided Asturias with two possible routes on the way to Santiago. The ulterior route and the coast route. Both of them show the real splendor of this beautiful region: mountain and sea, arts, tradition, important architectural buildings, gastronomy and, of course, beautiful villages with the most wonderful landscapes.

As we continue, we are about to show the most important routes to follow in this region:

El Salvador route (Puerto de Pajares- Oviedo). This is the ulterior route with two stages adding up to 58 kilometres and a half. This route passes near the highest peaks, the heavy forests and the deepest valleys. On these Asturian grounds, one can find the preromanic building that the pilgrims can admire: it is Santa Cristina de Lena in the municipality of Pola de Lena. In this quiet place one can relax easily in one of its hostels. Going on this route one reaches the village of Mieres del Camino. This Jacobean route crosses the town of Villallana and the minicipality of Ujo. From this point on, the route goes through the industrial landscape of central Asturias. In this place one can visit the minicipality of Olloniego where there is an important historical inheritance with a medieval bridge and la Casatorre of the Quirós. Going on in the same direction to the capital of this region one goes through La Manjoya and San Lazaro del Camino. Once in the city centre the route goes to La Magdalena road going to the town council until the cathedral square. To see in detail all about Oviedo’s cathedral.

The Coast route (Bustio- Oviedo). It has six stages adding up to 128 kilometres. This North route crosses Asturias by Bustio and this route also shows a beautiful landscape with many rivers, beaches, green fields and a white limestone with ends up between the Jurassic coast and the mountain range of Sueve.

The first one crosses the course of Deva’s river by the bridge of Bustio, the border between the regions of Cantabria and Asturias. The route reaches Colombres, the capital of the municipality of Ribadedeva, a quiet village where one can visit the old house of ancient Latin American, La Quinta de Guadalupe, being today the called The Latin American Archive. After this, one reaches the village of Llanes, crossing Buelna, Pendueles, Vidiago and Puertas de Vidiago. In Llanes, there is an important historical inheritance with beautiful buildings, walls and urban palaces belonging to the 15th and 18th centuries. After this, the route goes near the monastery of San Salvador of Celorio and the romanic church of Bedón. After a short walk one gets to the municipality of Nueva and Aguamia’s bridge, getting closer to the village of Ribadesella. The bridge over the Sella’s river reaches the quicksand of Santa Marina. From this point the Jacobean route goes to San Pedro, Abeu and Leces where you can find a hostel for the pilgrims. The route follows the seaside getting closer to the Vega’s beach and the town of Berbes. It reaches the municipality of Caravia and ends up on Colunga’s beach. In Colunga one can visit a beautiful chapel in the pilgrims’ hospital. In the municipality of Villaviciosa one can find the church of Nuestra Señora de la Olivia. Going further on in the route one can also visit the romanic church of San Juan de Amandi. The last places to visit by this coast route are Grases and Nievares, going on to the city of Gijón where the Laboral University is placed.

The Western Coast route. (Oviedo- Santiago de Abres). There are seven stages totalling up to 155 kilometres. Avilés, was founded in the year 1100 and it is the oldest coast route. Trying to get there one can also visit the villages of Santa Eulalia and San Juan de Tamón in the municipality of Carreño. One can walk down to the old city centre of Avilés by Rivero road, finding a lot of medieval monuments. From Avilés the route goes on the municipality of Castrillón, Piedras Blancas and Santiago del Monte. This route also follows the course of Nalon’s river next to the N-632 road. It goes on the municipality of Cudillero, and in the place of El Pito one can visit the baroque church of Santa María. In Luarca, one can find the usual old structures and others mainly of Latin American influence. Following the route one reaches the limit between the municipalities of El Franco and Tapia de Casariego. Once on Vegadeo’s grounds one takes the route of Real de Bustelo that ends up in Eo’s river and the villages of Figureras and Castropol. Both of them were supposed to have famous hospitals for the pilgrims.

Finally, one reaches Ribadeo, the first Galician town of this coast route.

The old route. (Oviedo- Fonsagrada). It has nine stages adding up to a total of 154 kilometres. This route goes alongside the municipality of Oviedo and las Regueras crossing the Nalon’s river by the Peñaflor’s bridge. Leaving behind the Santiago del Fresno one reaches the town of Salas, one of the most famous places in this route, with much historical inheritance. Important hospitals were proven to be in Cornellana, Salas, La Espina, Labio and Faedo. Here the route reches the municipality of Tineo. By the year 1222 the king Alfonso II ordered all the pilgrims to transit by Tineo and the monastery of Obona. Finally, one arrives at the municipality of Pola de Allende, where there is a large hostel for pilgrims. This is one of the most solitary places along the Asturian Jacobeo route but, on the other hand, it demonstrates one of the most splendid landscapes of the Asturian Mount that lead us to Grandas de Salime. In this last municipality of the route, one can visit the church of San Salvador of excellent romanic style and the Etnographic Museum, a very well known symbol of traditional Asturian culture.

Who can guide you to make “The Old Route”?

The Primitive Route is the first pilgrimage route to Santiago de Compostela starting from Oviedo crosses the western Asturias and after reaching the city of Lugo reaches the Galician capital. Both in spring and in autumn Geoface offers you three options to complete the route: on foot, horseback or bicycle, in hotels and rural accommodation with full board, guide and support vehicle interpreter of the natural environment and artistic heritage.
More information  Geoface: go along with you in “The Route to Santiago” .

2 responses to “The Route to Santiago through Asturias”